Maybe not your first guess at the side hobby of your neighborhood water treatment plant operator, but more likely than you’d think.

I want to introduce you to, hands-down, the coolest supporters of the Community Engineering Corps program: Ride With Purpose, also very affectionately known as the Water Buffalos. More than just a group of motorcycle enthusiasts, Ride With Purpose is a registered 501(c)(3) non-profit organization that raises money and awareness for other non-profit organizations that provide for safe drinking water, sanitation services and environmental stewardship to communities in need. As a big fan-girl, you can imagine how excited I was to get a chance to sit down with Water Buffalo #55, Tim Wilson.

Tim explains that the Herd has existed for 12 years, and in that time has raised over a million dollars for the cause. “Not bad for a bunch of bikers,” he says.

Tim has been riding with the Herd since 2013. He joined the group due to some positive peer pressure from pal, Sandy Smith. Sandy had joined the year prior and in 2013 the two were on the American Water Works Association (AWWA) Board of Directors together.

There are a few requirements before you can become a Buffalo:

Once you’ve accomplished these tasks, you’re invited to attend the Gathering of the Herd, an annual tradition where an induction ceremony is held. Tim’s first ride was to ACE13; it was his second year on the AWWA Board, and he trekked from Iowa to Denver, Colorado for the conference. Since that time, Tim has personally raised over $10,000 for noteworthy causes such as Water For People and Community Engineering Corps. Now an experienced and savvy rider, he gets a lot of slack from his fellow riders as “The Rental King.” Rather than maintain his own bike, he rents one every year for the ride to ACE. This way he gets the best and newest model. His favorite to date is the Harley Road Glide because it’s like a “big recliner on wheels.” (With a testimony like that, maybe I’ll start riding! – can I get an extra wheel…or two…?!)

At his “day-job,” Tim began his career as an operator in Wahpeton, Iowa, moved on to the Director of Water Production for Marshalltown, Iowa, and now is the Civic Group Leader with Shive-Hattery in the Cedar Rapids office. He enjoys working in the water sector because there is “always something different, and it’s constantly evolving.”

The same is true of the time he spends riding cross country on his motorcycle: “You get to see a lot, and think a lot. Sometimes you’re wet, dry, hot, and cold a couple times over, all in the same day. You wonder ‘where do these remote areas get their water from?’” Tim uses his time on the road to share his experiences in the water sector with fellow bikers and unassuming vacationing families. Like Tim, every member of the Herd prides themselves in being “directionally challenged – taking the scenic route.” Tim remarks, “It’s all about the journey. You meet a lot of people along the way. It’s also a chance to talk about unseen infrastructure and the value of water.”

These intimate views into nationwide conditions inspired Tim and other Buffalos to take an interest in Community Engineering Corps (CECorps). Tim, Sandy, and Ali Mahan were all on the AWWA Board of Directors and the Ride With Purpose Board when the CECorps program was launched in early 2014. They knew it was a program that would speak to the Herd, and they started sharing more about it and getting involved.

Tim is an active reviewer for the program’s Domestic Application Review Committee. He and Sandy both serve on AWWA’s Community Engineering Corps Advisory Committee, a committee of advocates that get their peers involved in the program in meaningful ways. Tim recognizes the need for volunteers, and as a trained operator and manager, he’s able to bring a different perspective to the table.

Ride With Purpose has also added Community Engineering Corps to the programs they support financially. A $20,000 gift from the Water Buffalos set the program up for success in 2017, allowing new volunteer teams to impact many communities with water sector needs. Again in 2018 the Herd has renewed their support of Community Engineering Corps with another $20,000 donation. Their passion for the program is “donor-driven,” Tim says. “Donors want to see domestic work as well as the great work that Water For People does globally. CECorps is a perfect match”.

Tim and the entire Herd are all volunteers, all taking to the open road on their own dime. 100% of donations and sponsorships raised go toward supporting programs like Community Engineering Corps.

Can’t ride a bike, but still want to make an impact like the Water Buffalos? Tim says it’s as simple as raising your hand. “Just say I’m willing to help, you will always get more back than you give”.

For more ways on how you can “raise your hand,” hop on over to our Volunteers Page, or visit the Water Buffalo’s webpage at www.ridewithpurpose.org to learn more.

The original article can be viewed here.

Update from the Herd!

Jaimie Foreman #82 In the News! 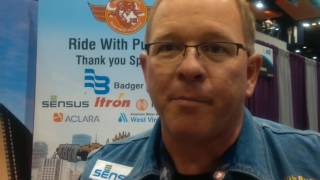